One of the few things I’m enjoying about Brexit is that we keep learning new words/phrases as they appear in everyday use on the news (as if we’ve all been bandying them about since we were small!). This week’s one is “prorogue” – “to discontinue a session of parliament without dissolving it”.  Dominic Raab’s great plan is that if you “prorogue” parliament until 31st October, then parliament can’t block Brexit occurring on that date.  Clever, huh?  He’s not just a pretty face.

But my favourite thing that I’ve learned about since June 2016 is the Overton Window. This is a term for “the range of ideas tolerated in public discussions”.  Things you can talk about without placing yourself apart from the range of discussion that society is willing to tolerate.  So, if I said “all prisoners should be sterilised”, then I’d be placing myself outside the Overton Window on that topic.  Society would never consider that a legitimate point for debate. (Note – it is very difficult to come up with a good example of something outside the OW, as by definition even the act of just mentioning something should make most people go “wow, I can’t believe he’s said that”!). 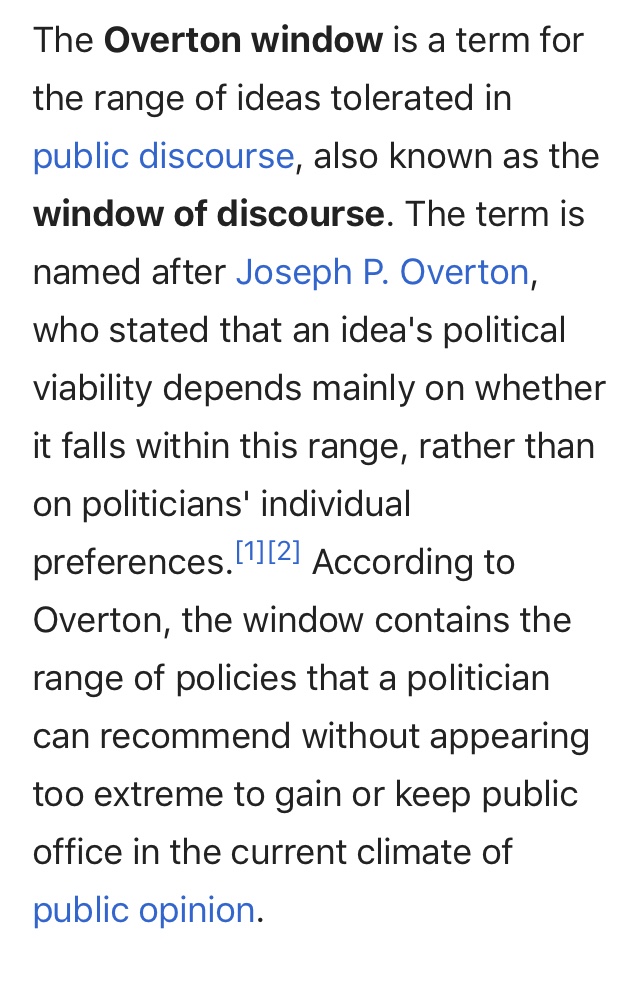 Where it gets interesting is where the Window moves, and things that would previously have been discounted as unacceptable/ridiculous suddenly become tolerated/normalised.

The nature of a “no deal Brexit” is one example – previously any sensible person would say that a no deal Brexit would be self-inflicted economic and political disaster, and that it shouldn’t be seriously considered. But now the window has moved, and some of those in favour of Brexit are now demanding a no deal Brexit, that it was what Leave voters all voted for, and with anything less “not being Brexit”.  It may well even end up being an option on a second referendum which is just mad – parliament asking people “do you want to vote for: the economy to be smaller; a significant percentage of the population to become unemployed; less money for education and social care; our international security to be weaker; and for us to ultimately have to sign up to the Withdrawal Agreement anyway, and still pay £39bn to the EU, when we go crawling back to them asking for a trade deal?”

However, this whole proroguing thing is just an incredible example of the Overton Window moving.  It really shouldn’t need said that any politician who would even consider shutting parliament down in order to avoid parliament making a decision, really isn’t fit to be in parliament (let alone leader of a party, never mind Prime Minister).  You don’t need to be a “taking back control” fetishist to see that as beyond ironic.  And yet here we are, where suggesting it as an actual possibility is seen as part of a spectrum of legitimate choices that the Tory party MPs and members could vote for when choosing a new leader and Prime Minister.

There are a bunch of swear words which, whilst not new, are getting a lot more use in a Brexit world.  My favourites being clusterf*ck and sh*tstorm.  But none of them seem to do justice to the state we’re in. I guess that is how you feel when the Overton Window moves, but your own views don’t.

It’s like we need to invent new swear words, ones that would previously have been outside the obscenity Overton Window.  That, or we somehow manage to move the Window back to the point where all the options within it at least seem sane.

In the past I had a (bad?) habit of writing reviews of music gigs I attended. They’re so old that I only have print outs of them. I recently found and scanned them. This is one, from Primal Scream in Edinburgh around 2002. I was single around this time and seemed to have a habit of commenting on the couples in the audience! 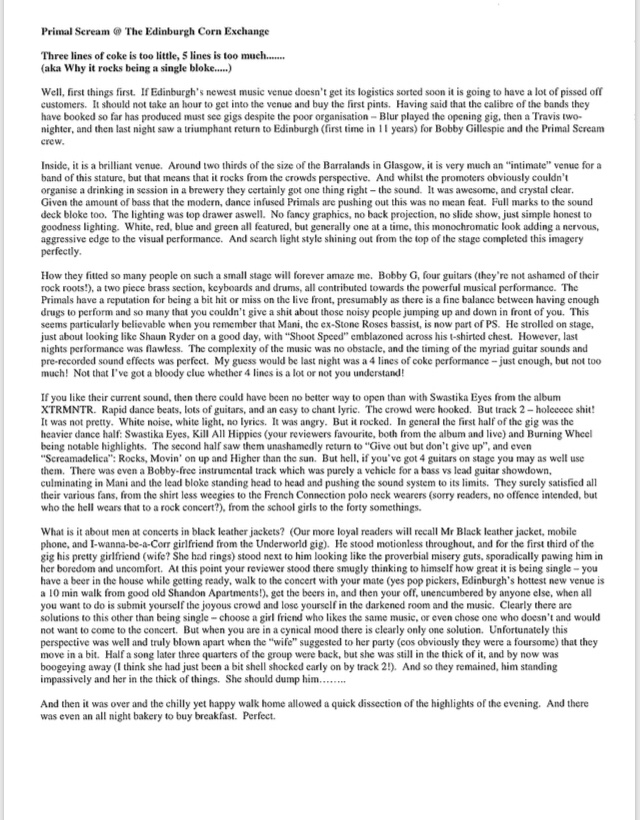 The House of Commons Library has written a paper on the number of NHS staff who are from overseas.  Full report here (note that it just covers England).

The report contains the following table which shows the great diversity within the workforce.

The report has been written to provide factual evidence into debates about the impact of Brexit on the NHS, though the non-EU stats are equally relevant.

We all know the NHS is heavily reliant on non-UK national workers, and the report headline is that 12% of NHS staff are nationals of a country other than the UK (split 5% EU, and 7% non-EU).

However, when you look at the breakdown by job type I’m still amazed to read that this includes 25.7% of Doctors (9.7% EU, and 16.0% non-EU). With Brexit, alongside the government’s wider obsession with lowering the immigration figures (even if you’re a skilled potential NHS worker, or an overseas student with money to pay for your course), then you have to worry about future staffing levels. It seems that plenty of A&E departments are already struggling, and that trend seems likely to spread.  As the report itself notes, this changing backdrop is coming “at a time when services are already under pressure”.

(I’m sure some reading this will be thinking it will be a good thing if the NHS stops syphoning off qualified people from other (poorer) countries, and I have sympathy with that sentiment.)

Real cynics, of which I try not to be one, go on about the Conservatives secret aim being to starve state bodies of investment/support (including sufficient staff) to the point where they can say that they are “broken” and “not fit for purpose” and then privatise them. I can feel myself being dragged from sceptic to cynic…..

Jake Yapp exists in that strange Fringe Twilight Zone – on telly and ergo “famous”, yet on in a modest 60 seat venue in George Square and still slightly petrified of running a loss over the next 3 weeks. As he notes, it has taken him 7 years to recover from his last appearance at the Fringe.

The show opens with one of his trademark time limited observational monologues, this one being 4 minutes on the Fringe itself. These are clearly when he is at his most comfortable, and entertaining.

The rest of the show covers a range of stand-up staples, from Trump to children’s books. You’ll never read “Guess how much I love you?” to your child in quite the same way again!

Yapp even managed a public service act, helping audience member Kat to seize the day and to finally make the decision that having arrived at the show a vegetarian, to leave as a vegan. Her “chips and hummus” await.

A healthy crowd bodes well for Yapp not having to worry about the profitability of his run, though it did look suspiciously like half the crowd were a bunch of lawyers on a work night out. One of them even dared to heckle, though it is surely debatable if the word “spiraliser” can count as a heckle.

Oh, and he mentioned Venn diagrams, which always does it for me.
4 stars

If there was another independence referendum, I’d have to do a lot of thinking about how I was going to vote.

The Budget. Take a moment to imagine being in the left hand half of this chart. What it tells you is that you are some of the poorest people in society, but the government thinks it can take over £1,000 off you (around 5-8% of your net income) but actually give money to the richest 20%.  This austerity thing seems a bit imbalanced?

In the same Budget, the Chancellor cut the rate of capital gains tax so that those who already have assets pay less tax on their growth, even though no one was asking for such a cut, and raised the ISA allowance dramatically (because only being able to shelter £15k each year wasn’t enough. “I just didn’t know what to do with the rest of my disposable income”!).

I really can’t believe that any sort of majority of society think this is right?

And it really highlights that the state of Labour, the “opposition”, isn’t just some lefty existential crisis, it is a bloody disaster for the country as no one (other than the SNP – God, did I really just write that?!) is doing the pretty easy job of holding the government to account.

And that’s all before we look at how they just privatised primary and secondary education in England too, and cut Corporation Tax from 20% to 17%.  This, from Jolyon Maugham (follow him, he’s a genius – waitingfortax.com  @JolyonMaugham), was actually written before the Budget, so the position’s actually got worse since he wrote this.

Back in September 2014 I had numerous monologues in my head (I did think about writing a blog, but wasn’t brave enough) about how it wasn’t right to vote for independence just because you didn’t like the Tory government.  Voting for independence is too big a thing, and if you don’t like the government in Westminster then campaign and vote for a different one. After all, it was only 4 years since the last Labour government, and that had been around for quite a while!  I don’t regret how I voted in 2014, but posts like these ones (first two by David Allen Green aka “Jack of Kent” jackofkent.com) make it look like the Tories are doing all they can, whilst they have power, to permanently rig the system in their favour.

There’s so much to be angry about it is hard to know where to start. I still, personally, think it is appalling that Nicola Sturgeon could even consider another referendum in any sub-10 year timescale. You can’t keep causing such disruption and uncertainty on a regular basis – it WILL have a negative affect on the country, on investment etc. (though is that their plan?  If they do too good a job of running a devolved Scotland, then why would anyone vote for independence?).

However, I have to say that if there was another independence referendum tomorrow, I’d have to do a lot of thinking about how I was going to vote.